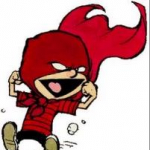 This administrator is currently inactive and will be unlikely to respond to any messages. If you have a question for an adminstrator, please see Transformers Legends Wiki:Administrators for a list of active admins.